Numbers have a very important significance for many Chinese people. Here is an overview for you about lucky Chinese numbers and their meanings. 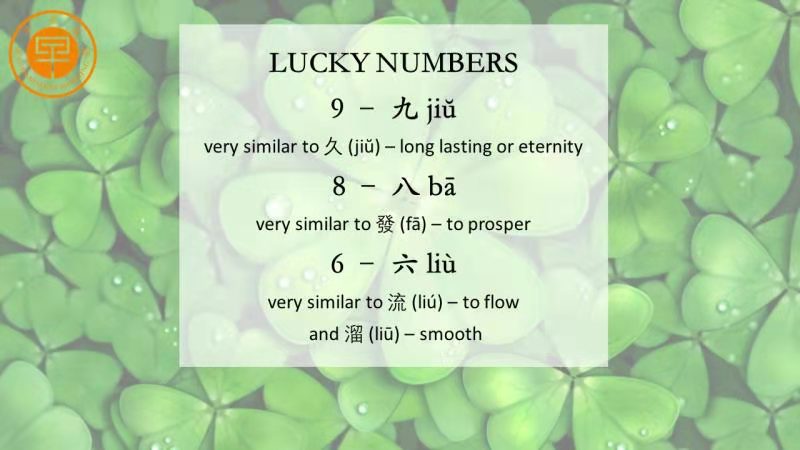 Lucky Numbers in Chinese: 9 – 九 jiŭ
The number 9 in Chinese sounds very similar to 久, jiŭ which translates to “long lasting” or “eternity”.
In fact, both characters have the same pinyin and the same tone, meaning they sound exactly the same.
Due to this, it’s an example of a number that is used at Chinese weddings and also birthdays! The number represents longevity so is perfectly apt for either of these celebrations.

Lucky Numbers in Chinese: 8 – 八 bā
The pinnacle of lucky numbers in China! Number 8 in Chinese, bā sounds very similar to the word “to prosper” 發 fā.
People in China go to extraordinary lengths to get themselves a number plate, or a mobile phone number with as many 8’s in there as possible!
To give you an idea of exactly how high the number 8 is on the pedestal, here are some fun facts of how the number 8 is implemented in China:
- The Chinese phone number +86 28 8888 8888 was sold for over 2,000,000 Yuan. Sichuan Airlines were the airline in question back in 2003!
- The 2008 Beijing Olympic Games Opening Ceremony took place at the exact time of 8/8/2008 at 8:08.08

Lucky Numbers in Chinese: 6 – 六 Liù
Despite the fact the number 6 can have negative connotations in the western world due to the number 666 referring to the devil, in China it works differently.
Number 6 in Chinese sounds similar to 流 liú which means “to flow” and 溜 liū which means smooth or slick in Chinese.
When six is paired together numerous times to make 66, 666 or 6666 etc these are actually considered very lucky numbers.

Combinations and Their Meaning
Now you know 6,8 and 9 are China’s lucky numbers.
Moving on from singular lucky numbers, there are also some combinations which is worth introducing you to.
These aren’t necessarily lucky, but they are well worth knowing because you’ll see them pop up a lot! Let’s introduce you to two of them.
520 (五二零, wǔ èr líng) – This is one of the most common combinations that is widely used across WeChat. Why you ask? Take the phrase for “I Love You” in Chinese, this is 我爱你 (wǒ ài nǐ) in Chinese. Note the sound for this almost resembles 520 in Chinese Pinyin. Many Chinese would type 520 in a message to a partner with the intention of expressing their love for that person, because typing 我爱你 is apparently just too much effort!
1314 (一三一四, yī sān yī sì) – This number combination actually links directly to the above. 1314 sounds pretty close to 一生一世 (yī shēng yī shì). The direct translation of this is “one life one world”. How does this link to the above? Combine them to make 5201314… I love you forever.